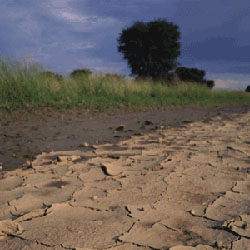 What is the problem?

Human actions are fundamentally, and to a significant extent irreversibly, changing the diversity of life on Earth, and most of these changes represent a loss of biodiversity. Changes in important components of biological diversity were more rapid in the past 50 years than at any time in human history. Projections and scenarios indicate that these rates will continue, or accelerate, in the future.

Virtually all of Earth’s ecosystems have now been dramatically transformed through human actions. Over the past few hundred years, humans have increased species extinction rates by as much as 1,000 times background rates that were typical over Earth’s history (See below).

Why is biodiversity loss a concern?

Biodiversity contributes directly (through provisioning, regulating, and cultural ecosystem services)and indirectly (through supporting ecosystem services) to many constituents of human well-being, including security, basic material for a good life, health, good social relations, and freedom of choice and action. Many people have benefited over the last century from the conversion of natural ecosystems to human-dominated ecosystems and the exploitation of biodiversity. At the same time, however, these losses in biodiversity and changes in ecosystem services have caused some people to experience declining well-being, with poverty in some social groups being exacerbated.

1. Climate, biodiversity and human wellbeing are inextricably linked. Significant political commitments and policy objectives for each now exist at national and international levels. Our understanding of these issues, the relevant processes and their inter-relationships is far from complete. But we know enough to identify some critically important matters for immediate attention and priority areas for research and policy development. New mechanisms will be needed to galvanise work in this area, especially at the intergovernmental level.

2. Significant climate change impacts on biodiversity have already been identified with up to 50% of the species studied world-wide observed to be affected. The Inter-governmental Panel on Climate Change (IPCC 2007b) concludes that if temperature increases exceed 1.5-2.5°C, 20-30% of plant and animal species assessed are likely to be at risk of extinction.

3. The continuing, accelerating loss of biodiversity could compromise the long-term ability of ecosystems to regulate the climate, may accelerate or amplify climate warming and could lead to additional, unforeseen, and potentially irreversible shifts in the earth system. Urgent action now to halt further loss or degradation of biodiversity could help to maintain future options for tackling climate change and managing its impacts.

4. Both mitigation and adaptation are urgently required if we are to reduce climate change and its impacts over coming decades. Many of the people most vulnerable to climate change are those who depend most on biodiversity. Climate change policy must maximise the opportunities for implementation of mutually supportive strategies.

5. New policies are needed to integrate options for meeting biodiversity, climate and sustainable development objectives at the international, national, and local levels. Difficult policy choices lie ahead, requiring scientific and technical expertise and understanding of socio-economic and ethical considerations. For example, climate change policies must, as a priority, identify the protection of biodiversity and healthy ecosystems as highly relevant to climate change mitigation and adaptation.

1.1 The interconnectedness of climate, biodiversity and human wellbeing

Biodiversity is important in ecosystems and for the provision of ecosystem services including climate regulation. It can therefore play an important role in reducing climate change and its impacts, and protecting and improving societal wellbeing. However, there is growing concern that efforts to address climate change may have the unintended consequence of exacerbating biodiversity loss, and so reduce future options for responding to climate change.

Climate, biodiversity and human wellbeing are inextricably linked (Figure 1). Over the past few hundred years, human activity has significantly changed the face of the planet, a period sometimes described as the anthropocene (Crutzen & Stoermer 2000). As a consequence we are changing the earth’s climate, species are disappearing at a faster rate than ever before, and many of the ecosystems on which humans and other species depend for their basic survival are being degraded or used unsustainably.

Over the last 50 years humans have changed ecosystems more rapidly and extensively than in any comparable period of time in human history (MA 2005a). The implications of these changes are only now beginning to be understood. Anthropogenic climate change provides a compelling example of the profound effect human activities can have on natural systems and of the consequences of these impacts for human wellbeing. Even if greenhouse gas emissions were to cease immediately, temperatures would continue to rise for at least 30 years, and sea levels for the next 100 years. Action must be taken now to prepare for the impacts that are inevitable over forthcoming decades. Efforts must be targeted to reducing the vulnerability of those human populations and ecosystems most at risk.

Because ecosystems collectively determine the biogeochemical and biophysical processes that regulate the earth system, the potential ecological and climate consequences of biodiversity loss are arousing significant scientific interest. Continued biodiversity loss may compromise the longterm ability of ecosystems to regulate the climate, may accelerate or amplify climate warming, and could lead to additional, unforeseen, and potentially irreversible shifts in the earth system.

Biodiversity loss and ecosystem degradation should be of major concern to decision-makers around the world. However, recognition of the critical nature of this problem, and of the potential opportunities of biodiversity management for meeting climate change policy objectives, has been slow to appear outside of the biodiversity community.

The interdependencies of biodiversity, ecosystems, human livelihoods and the climate system make it possible to address biodiversity loss, ecosystem degradation, sustainable development, and climate change and its impacts, together. However, there is also growing awareness that win-win-wins will not always be possible, and trade-offs may be necessary. To realise the potential co-benefits, and to ensure trade-offs are as equitable and ecologically sustainable as possible, new decision-making and implementation frameworks are required.

The international community has a critical role to play in this, and in supporting the capacity building and resources required for implementation. National governments and local communities also have their part to play. The messages are simple; climate change is unequivocal. Both mitigation and adaptation will be required to address the risks posed by climate change. Biodiversity and human wellbeing are inextricably linked and climate regulation must be central to the development of adaptation and mitigation programmes.

Biological diversity (biodiversity) is defined by the Convention of Biological Diversity (CBD) as the variability among living organisms from all sources, including terrestrial, marine and other aquatic ecosystems, and the ecological complexes of which they are part. This includes diversity within species, between species, and of ecosystems. The role and function of biodiversity in ecosystems is complex but we know those ecosystem properties, and therefore the services they provide, are influenced by the characteristics of the species present and their functional traits (Reich et al 2004, Hooper et al 2005).

Crucially, higher genetic and species diversity tends to make ecosystems more resistant and resilient to disturbance. This is because species are more likely to be present with characteristics that will enable the ecosystem to adjust to environmental change (Hooper et al 2005, Reusch et al 2005, Tilman et al 2006). This means that ecosystems can continue to function and provide critical services such as water purification. As biodiversity declines, so too does the resilience of the system (Amazon ecosystem).

Ecosystems with low resilience, when subject to shocks or disturbance, may reach a threshold at which abrupt change occurs (Scheffer et al 2001). Biodiversity is therefore important as it provides flexibility and insurance, and spreads risk across temporal and spatial scales (Yachi and Loreau 1999, Loreau, Mouquet and Gonzalez 2003).

The components of human wellbeing were defined by the Millennium Ecosystem Assessment (2005) as security, basic material for a good life, health, good social relations, and freedom of choice and action, all of which depend either directly or indirectly on ecosystems and the services they provide (and therefore on biodiversity). Humans rely on food, clean air and water, timber and medicines for survival. Human livelihoods rely on ecological services that support global employment and economic activity (for example food and timber production, marine fisheries and aquaculture, and recreation) (MA 2005a).

The relationship between biodiversity and human wellbeing was characterised by the Millennium Ecosystem Assessment (MA) (2005a), which described four categories of services provided by ecosystems to society (see Figure 2). Supporting services underpin all other ecosystem services and capture processes such as carbon cycling (eg primary production, decomposition, and soil formation), and water and nutrient (eg nitrogen and phosphorus) cycling. Regulating services provide the mechanisms that moderate the impact of stresses and shocks on ecosystems (Kinzig et al 2006) and include, for example, climate and disease regulation. Regulating services determine the distribution of provisioning services, such as food, fuel and fibre, and cultural services such as spiritual and aesthetic values (Kinzig et al 2007).

The transformation of ecosystems and exploitation of natural resources have resulted in substantial gains in human wellbeing and economic development. However, the benefits have not been equitably distributed, and the costs of biodiversity changes either not recognised or quantified. This is because ecosystems tend to be valued by people in terms of the direct benefits provided by provisioning and cultural services (eg food, fibre, recreation and aesthetics respectively) which represent a relatively small component of biodiversity. However, the supply of these services is underpinned by supporting and regulating services, (for example pollination, climate regulation and primary productivity respectively), for which the value of biodiversity is less visible but no less important (Scholes & Midgley 2007, Kinzig et al 2007).

Biodiversity loss, ecosystem degradation, and consequent changes in ecosystem services have also led to a decline in human wellbeing in some groups by exacerbating poverty and increasing inequities and disparities (MA 2005b).

Millennium Ecosystem Assessment typology of the relationships between Biodiversity, Ecosystem functioning, and Ecosystem services. Biodiversity is both a response variable affected by global change drivers, and a factor modifying ecosystem processes and services and human well-being (MA 2005b).