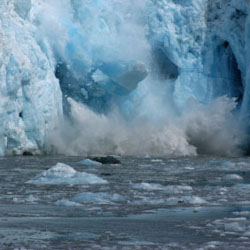 The progressive gradual rise of the earth’s surface temperature caused by the greenhouse effect and responsible for changes in global climate patterns. An increase in the near surface temperature of the Earth. Global warming is occuring as a result of natural influences and human activities, such as increased emissions of greenhouse gases.

Undoubtedly the temperature of the globe has fluctuated since the very beginnings of our planet. The real problem is not just the fact that it is warming, but the rate at which it is warming. >From historical temperature readings, 11 of the last 12 years (1995�2006) are amongst the 12 hottest years since global temperatures have been measured (from about the 1850s). But that is the recent past, and scientists are suggesting that the current rapid rate of warming has no parallel within the last million years. Even when the globe did warm towards the end of an ice age the process was very gradual, warming up over a period of about 5,000 years. Our Earth is heating up, and heating up quickly.

The atmosphere surrounding the earth is mainly composed of Nitrogen (about seventy eight percent, and Oxygen (twenty one percent) with water vapour and various trace gases making up the rest. There are quite a few trace gases, such as; Argon, Carbon Dioxide, Neon, Helium, Methane, Hydrogen, Nitrous Oxide and Ozone. These gases, are often called green house gases because during the day the earth soaks up heat, and these gases act like a greenhouse trapping in the heat. Some of the heat is radiated back out into space, and if weren�t for these gases things would freeze over during the night. The issue of course is the increase in greenhouse gases, which is trapping in more heat, and causing a rise in global temperature.

The proportion of greenhouse gases has increased significantly since the Industrial Revolution. Humans began burning fossil fuels, (particularly coal) in a big way, to drive steam engines for industry, and generate electricity. When fossil fuels are burnt or combusted, carbon dioxide, methane and nitrous dioxide are given off as gases. In addition to escalating coal use after the Industrial Revolution, came the widespread use of another fossil fuel; petroleum for transport. At the beginning of the 20th century, annual global oil output was about 150 million barrels of oil, now, that amount is extracted globally in just two days. Burning fossil fuels releases billions of tonnes of carbon dioxide that has been locked away in the Earth for millions of years. Humans are adding billions of tonnes of carbon dioxide to the atmosphere each year, and guess what? Carbon dioxide is a greenhouse gas.

The rate at which the planet is warming is possibly the single biggest challenge to ever face humanity. The impacts are likely to devastating, we need to act decisively, and act now….

To combate Global warming is a collective responsibity and everyone has a role to play in making the earth a safer and cleaner for the future generation.

Hi, this is a comment.
To get started with moderating, editing, and deleting comments, please visit the Comments screen in the dashboard.
Commenter avatars come from Gravatar.