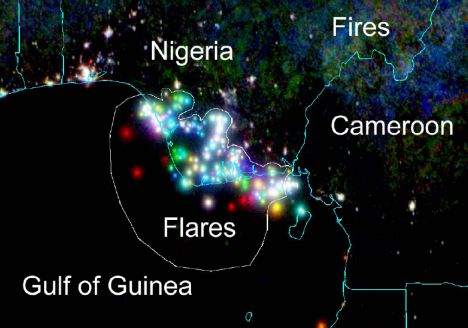 The first recently unveiled global satellite survey of gas flaring is a process commonly used to dispose of natural gas freed during oil production and has shown what many have now suspected for years: it is an extremely wasteful, costly problem that has helped contribute to global warming. Conducted over a 12-year period spanning 1995-2006, the survey, commissioned by the World Bank’s Global Gas Flaring Reduction partnership (GGFR), was carried out by a team of scientists from the National Oceanic and Atmospheric Administration (NOAA).

Estimates produced for about 60 countries around the world revealed that gas flaring has remained largely stable over the last 12 years in the range of 150-170 billion cubic meters annually although 22 mostly lesser developed countries increased its use over that period (on the other hand, 16 other countries decreased its use). In 2006 alone, oil producing companies and countries burned close to 170 billion cubic meters of natural gas, equivalent to a whopping 27% of total U.S. natural gas consumption or 5.5% of total global production of natural gas. Flaring also emits around 400 million tons of carbon dioxide emissions every year.

“Gas flaring not only harms the environment by contributing to global warming but is a huge waste of a cleaner source of energy that could be used to generate much needed electricity in poor countries around the world. In Africa alone about 40 billion cubic meters of gas are burned every year, which if put to use could generate half of the electricity needed in that continent, said Bent Svensson, head of the GGFR partnership.

The NOAA scientists used low-light imaging data from the Air Force Defense Meteorological Satellite Program to ascertain the volumes of gas burned during flares which are only visible under nighttime, cloud-free conditions.

In the last few years, companies and governments have made efforts to eliminate flaring and reclaim the wasted energy by re-injecting it into the ground to bolster oil production, transporting it to new markets via pipelines, using it onsite for electricity generation or by converting it into LNG for shipment. GGFR will continue to monitor worldwide gas flaring over the next few decades to encourage countries and companies alike to reduce the amount of waste and emissions generated.