The Amazon a Key Ecosystem. 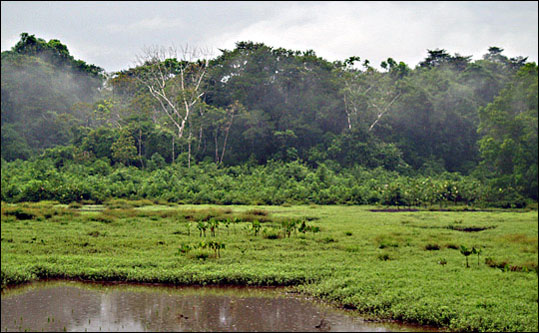 The climate of Amazonia is strongly dependent on the presence of the forest. Amazonia has been described as a “Green Ocean” with satellite imagery revealing very high cloud cover and rainfall over the region in comparison with the surrounding oceans. The forest is also a very large carbon store.

In comparison to unforested land, forest cover can enhance evapotranspiration through the extraction of moisture deep in the soil by plant roots. The canopy can capture a greater fraction of rainfall which is then re-evaporated back to the atmosphere, compared to bare soil which holds less water on the surface before runoff and infiltration. Furthermore, the higher aerodynamic roughness of a forested land surface can promote the flux of moisture to the atmosphere through enhanced turbulence.

Deforestation in the Amazon region accounts for 5-10% of global CO2 emissions. Global climate change may also lead to changes in Amazonian vegetation cover, especially if there is a significant reduction in rainfall in the region. The relationship between the warming of global average temperature and changes in regional rainfall patterns is highly uncertain, but a number of climate models suggest that global warming could lead to particular patterns of warming in the North Atlantic, and tropical east Pacific sea surface temperatures (SSTs) which change the atmospheric circulation reducing rainfall across large parts of Amazonia.

Strong drying of Amazonia or North East South America is simulated by variants of the Hadley Centre climate model (Cox et al 2004) and feedbacks between the forest loss and regional and global climate contribute to the strength of this drying (Betts et al 2004).

Deforestation or degradation of the forest as a result of habitat fragmentation or climate change may therefore significantly alter the climate of the Amazon region and also contribute to global climate change.