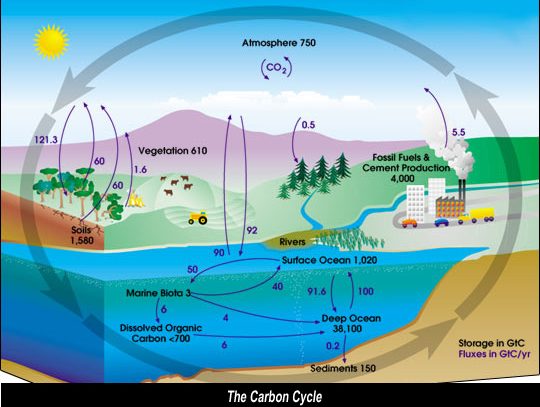 The global carbon cycle refers to the movements of carbon, as it exchanges between reservoirs (sinks), and occurs because of various chemical, physical, geological, and biological processes. The ocean contains the largest active pool of carbon near the surface of the Earth, but the deep ocean part of this pool does not rapidly exchange with the atmosphere. Below in the diagram, you can get some idea where and how carbon is stored in the whole Earth system. The global carbon cycle is usually thought to have four major carbon sinks interconnected by pathways of exchange. These sinks are;

Carbon exists in the Earth’s atmosphere primarily as the gas carbon dioxide (CO2). Although it is a very small part of the atmosphere overall (approximately 0.04% and rising fast), it plays an important role in supporting life. Other gases containing carbon in the atmosphere are methane and chlorofluorocarbons (the latter is one we introduced and are still adding to). These are all greenhouse gases whose concentration in the atmosphere are increasing, and contributing to the rising average global surface temperature.

Carbon is taken up from Earth’s system in several ways:

1. When the sun is shining, plants perform photosynthesis to convert carbon dioxide into carbohydrates, releasing oxygen in the process. Deforestation and land clearing pose serious problems to the carbon cycle, and obliterating this sink means more carbon is forced into the atmosphere.

2. At the surface of the oceans towards the poles, seawater becomes cooler and CO2 is more soluble. Cold ocean temperatures favour the uptake of carbon dioxide from the atmosphere whereas warm temperatures can cause the ocean surface to release carbon dioxide. With seas warming this means CO2 is not so easily absorbed, and remains in the atmosphere. This is coupled to the ocean’s thermohaline circulation which transports dense surface water into the ocean’s interior. During times when photosynthesis exceeded respiration, organic matter slowly built up over millions of years to form coal and oil deposits. All of these biologically mediated processes represent a removal of carbon dioxide from the atmosphere and storage of carbon in geologic sediments.

3. In upper ocean areas of high productivity, organisms form tissue containing carbon, and some also form carbonate shells or other hard body parts. Apart from trees in forests, phytoplankton in the Earth’s oceans are very important organisms that soak up carbon. The seas contain around 36000 gigatonnes of carbon, and again and in warmer seas, organisms cannot produce carbonate shells at the same rate, and increasingly acidic seas dissolve shells, or make it difficult to create shelly material. This means of course that carbon dioxide is not being taken up as quickly through this process and more carbon remains in the atmosphere, propelling global warming.

4 . As shelled organisms die, bits and pieces of the shells fall to the bottom of the oceans and accumulate as sediments. Only small amounts of residual carbon from plankton settle out to the ocean bottom but over long periods of time these represent a significant removal of carbon from the atmosphere.

Carbon can be released back into the system in many different ways:

1. Through the respiration performed by plants and animals.

2. Through the decay of animal and plant matter. Fungi and bacteria break down the carbon compounds in dead animals and plants and convert the carbon to carbon dioxide if oxygen is present, or methane if not. The melting permafrost is releasing large amounts of methane, which contributes to global warming at a rate 21 more times than carbon dioxide.

3. Through combustion of biomass which oxidizes the carbon it contains, producing carbon dioxide (as well as other things, like smoke). Burning fossil fuels such as coal, petroleum products, and natural gas releases millions of tonnes of carbon that has been stored in the geosphere for millions of years. Fires also consume biomass and organic matter to produce carbon dioxide (along with methane, carbon monoxide, smoke), and the vegetation that is killed but not consumed by the fire decomposes over time adding further carbon dioxide to the atmosphere. Wildfires and forest fires are likely to increase as land masses dry out with higher rates of evaporation.

4. Production of cement. A component, lime, is produced by heating limestone, which produces a substantial amount of carbon dioxide, and impacting upon the global carbon cycle.

5. At the surface of the oceans where the water becomes warmer, dissolved carbon dioxide is released back into the atmosphere.

6. Volcanic eruptions and metamorphism are part of the global carbon cycle and release gases into the atmosphere. These gases include water vapour, carbon dioxide and sulphur dioxide. Find out how volcanic gases are measured here.

Latest Trends and Cause for Alarm!

There has been a decline in the efficiency of natural land and ocean sinks which soak up carbon dioxide (CO2) emitted to the atmosphere by human activities (anthropogenic) , according to findings published in late Oct 2007, in the Proceedings of the National Academy of Sciences of the US (PNAS).

The swift increase in atmospheric CO2 is due to faster economic growth coupled with a halt in carbon intensity reductions, in addition to natural sinks removing a smaller proportion of emissions from the air. Carbon intensity is the amount of carbon emitted to produce one dollar of global wealth.

The study’s lead author, Dr Pep Canadell, executive director of the Global Carbon Project, explained Fifty years ago, for every tonne of CO2 emitted, 600kg were removed by natural sinks. In 2006 only 550kg were removed per tonne and that amount is falling.

In addition to the growth of global population and wealth, we now know that significant contributions to the growth of atmospheric CO2 arise from the slow down of natural sinks and the halt to improvements in carbon intensity. The rise in growth in atmospheric CO2 is generating climate forcings that are bigger and sooner than expected. By altering the global energy balance, these mechanisms “force” the climate to change.

We already possess the scientific, technical, and industrial know how to solve the carbon and climate problem for the next half-century. A concept known as “carbon wedges” proposes to limit the human contribution to the global carbon cycle, in an effort to reduce global warming. Adoption of the wedge concept is essential if we are going to curb our extraordinary abuse of fossil based fuels